A friend of mine in New York City has a half-fare transit card, which means that you get on buses and subways for half price. And the other day, when he showed his card to the token attendant, the attendant asked what his disability was and he said, I have AIDS. And the attendant said, no you don't, if you had AIDS, you'd be home dying. And so, I wanted to speak out today as a person with AIDS who is not dying. 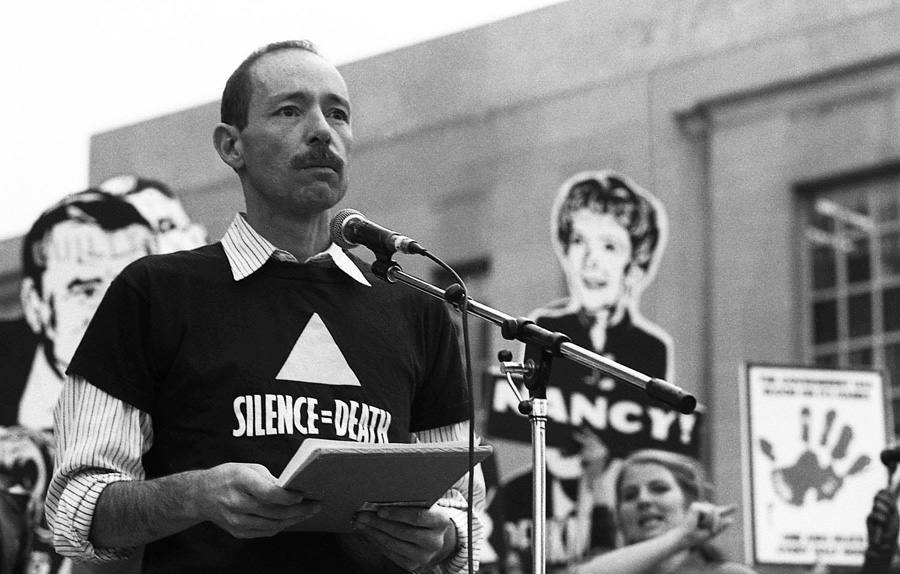 You know, for the last three years, since I was diagnosed, my family thinks two things about my situation. One, they think I'm going to die, and two, they think that my government is doing absolutely everything in their power to stop that. And they're wrong, on both counts.

If I'm dying from anything—I'm dying from the fact that not enough rich, white, heterosexual men have gotten AIDS for anybody to give a sh-t. You know, living with AIDS in this country is like living in the twilight zone. Living with AIDS is like living through a war which is happening only for those people who happen to be in the trenches. Every time a shell explodes, you look around and you discover that you've lost more of your friends, but nobody else notices. It isn't happening to them. They're walking the streets as though we weren't living through some sort of nightmare. And only you can hear the screams of the people who are dying and their cries for help. No one else seems to be noticing.

And it's worse than a war, because during a war people are united in a shared experience. This war has not united us, it's divided us. It's separated those of us with AIDS and those of us who fight for people with AIDS from the rest of the population.

Two and a half years ago, I picked up Life magazine, and I read an editorial which said, "it's time to pay attention, because this disease is now beginning to strike the rest of us." It was as if I wasn't the one holding the magazine in my hand. And since then, nothing has changed to alter the perception that AIDS is not happening to the real people in this country.

It's not happening to us in the United States, it's happening to them—to the disposable populations of fags and junkies who deserve what they get. The media tells them that they don't have to care, because the people who really matter are not in danger. Twice, three times, four times—The New York Times has published editorials saying, don't panic yet, over AIDS—it still hasn't entered the general population, and until it does, we don't have to give a sh-t.

And the days, and the months, and the years pass by, and they don't spend those days and nights and months and years trying to figure out how to get hold of the latest experimental drug, and which dose to take it at, and in what combination with other drugs, and from what source? And, how are you going to pay for it? And where are you going to get it? Because it isn't happening to them, so they don't give a sh-t.

And we read on the front page of The New York Times last Saturday that Anthony Fauci now says that all sorts of promising drugs for treatment haven't even been tested in the last two years because he can't afford to hire the people to test them. We're supposed to be grateful that this story has appeared in the newspaper after two years. Nobody wonders why some reporter didn't dig up that story and print it 18 months ago, before Fauci got dragged before a Congressional hearing.

How many people are dead in the last two years, who might be alive today, if those drugs had been tested more quickly? Reporters all over the country are busy printing government press releases. They don't give a sh-t, it isn't happening to them—meaning that it isn't happening to people like them—the real people, the world-famous general public we all keep hearing about.

Legionnaire's Disease was happening to them because it hit people who looked like them, who sounded like them, who were the same color as them. And that f-cking story about a couple of dozen people hit the front page of every newspaper and magazine in this country, and it stayed there until that mystery got solved.

All I read in the newspapers tells me that the mainstream, white heterosexual population is not at risk for this disease. All the newspapers I read tell me that IV [intravenous] drug users and homosexuals still account for the overwhelming majority of cases, and a majority of those people at risk.

And can somebody please tell me why every single penny allocated for education and prevention gets spent on ad campaigns that are directed almost exclusively to white, heterosexual teenagers—who they keep telling us are not at risk!

Why is every bus and subway ad I read and every advertisement and every billboard I see in this country specifically not directed at gay men? Don't believe the lie that the gay community has done its job and done it well and educated its people. The gay community and IV drug users are not all politicized people living in New York and San Francisco. Members of minority populations, including so-called sophisticated gay men are abysmally ignorant about AIDS.

If it is true that gay men and IV drug users are the populations at risk for this disease, then we have a right to demand that education and prevention be targeted specifically to these people. And it is not happening. We are being allowed to die, while low-risk populations are being panicked—not educated, panicked— into believing that we deserve to die.

Why are we here together today? We're here because it is happening to us, and we do give a sh-t. And if there were more of us, AIDS wouldn't be what it is at this moment in history. It's more than just a disease, which ignorant people have turned into an excuse to exercise the bigotry they have always felt.

It is more than a horror story, exploited by the tabloids. AIDS is really a test of us, as a people. When future generations ask what we did in this crisis, we're going to have to tell them that we were out here today. And we have to leave the legacy to those generations of people who will come after us.

Someday, the AIDS crisis will be over. Remember that. And when that day comes—when that day has come and gone, there'll be people alive on this earth— gay people and straight people, men and women, black and white, who will hear the story that once there was a terrible disease in this country and all over the world, and that a brave group of people stood up and fought and, in some cases, gave their lives, so that other people might live and be free.

So, I'm proud to be with my friends today and the people I love, because I think you're all heroes, and I'm glad to be part of this fight. But, to borrow a phrase from Michael Callen's song ["Love Don't Need a Reason"]: all we have is love right now, what we don't have is time.