The take-over lasted 14-months and ended when the Indians were forcibly removed by the federal government.

Indians of All Tribes claimed the island by citing the Treaty of Fort Laramie (1868) between the U.S. and the Sioux. The treaty returned to Native peoples all retired, abandoned and out-of use federal lands. When Alcatraz penitentiary closed in 1963, the U.S. declared the island as surplus federal property. So Red Power activists reclaimed it.

On March 9, 1964, Richard McKenzie and other Sioux occupied Alcatraz for four hours.

On November 9, 1969, another group of activists returned.  A boat carried Richard Oakes (Mohawk), Jim Vaughn (Cherokee), Joe Bill (Eskimo), Ross Harden (Ho-Chunk) and Jerry Hatch close to the island. Then the men jumped overboard, swam to shore, and claimed the island by right of discovery.

The Coast Guard quickly removed them.

Later that day, a larger group made their way to the island.  Fourteen stayed overnight. The next day, the group proclaimed the island by right of discovery. Then they left the island.

On November 20, 1969, American Indians again landed on Alcatraz-- despite an attempted Coast Guard blockade. The 79 Indians included including students, married couples and six children which included actor Benjaman Bratt and his siblings.

To announce their action to the world, the dissidents issued the Alcatraz Proclamation. Theoccupiers cited treatment under the Indian Termination policy as the reason. They also accused the U.S. of breaking numerous Indian treaties.The IAT said they intended took the island over to build a Native American Studies center, spiritual center, an ecology center, and an American Indian Museum.

Richard Oakes sent a message to the San Francisco Department of the Interior:

"We invite the United States to acknowledge the justice of our claim. The choice now lies with the leaders of the American government - to use violence upon us as before to remove us from our Great Spirit's land, or to institute a real change in its dealing with the American Indian. We do not fear your threat to charge us with crimes on our land. We and all other oppressed peoples would welcome spectacle of proof before the world of your title by genocide. Nevertheless, we seek peace."

On Thanksgiving Day, hundreds of supporters made their way to Alcatraz to celebrate the Occupation. In December, John Trudell began daily radio broadcasts from the island. In January 1970, occupiers began publishing a newsletter.

Joseph Morris, a Blackfoot longshoreman, rented space on Pier 40 to transport supplies and people to the island.

Then, in January 1970, 13-year-old Yvonne Oakes fell to her death. The Oakes family left Alcatraz, saying they didn't have the heart for it anymore. Some original occupiers left to return to school.

New occupiers soon came to the island, but several had drug addictions. People from San Francisco's drug and hippie culture joined them until until non-Indians were prohibited from staying overnight.

By late May, the government had cut off all electrical power and telephone service. In June, a fire destroyed many  buildings.

Left without power, fresh water, and declining public sympathy and support, occupiers began leaving the island. On June 11, 1971, a large force of government officers removed the last 15 people from Alcatraz.

The Occupation of Alcatraz brought international attention to the plight of Native peoples in the U.S. It also sparked more than 200 instances of civil disobedience among Native people. Some call the occupation  "The cradle of the modern Native American civil rights movement."

Proclamation to the Great White Father and All His People

We, the native Americans, re-claim the land known as Alcatraz Island in the name of all American Indians by right of discovery.

We wish to be fair and honorable in our dealings with the Caucasian inhabitants of this land, and hereby offer the following treaty:

We will purchase said Alcatraz Island for twenty-four dollars ($24) in glass beads and red cloth, a precedent set by the white man's purchase of a similar island about 300 years ago. We know that $24 in trade goods for these 16 acres is more than was paid when Manhattan Island was sold, but we know that land values have risen over the years. Our offer of $1.24 per acre is greater than the 47¢ per acre that the white men are now paying the California Indians for their land. We will give to the inhabitants of this island a portion of that land for their own, to be held in trust by the American Indian Affairs [sic] and by the bureau of Caucasian Affairs to hold in perpetuity—for as long as the sun shall rise and the rivers go down to the sea. We will further guide the inhabitants in the proper way of living. We will offer them our religion, our education, our life-ways, in order to help them achieve our level of civilization and thus raise them and all their white brothers up from their savage and unhappy state. We offer this treaty in good faith and wish to be fair and honorable in our dealings with all white men.

We feel that this so-called Alcatraz Island is more than suitable for an Indian Reservation, as determined by the white man's own standards. By this we mean that this place resembles most Indian reservations in that:

1. It is isolated from modern facilities, and without adequate means of transportation.

2. It has no fresh running water.

3. It has inadequate sanitation facilities.

4. There are no oil or mineral rights.

5. There is no industry and so unemployment is very great.

6. There are no health care facilities.

7. The soil is rocky and non-productive; and the land does not support game.

8. There are no educational facilities.

9. The population has always exceeded the land base.

10. The population has always been held as prisoners and kept dependent upon others.

Further, it would be fitting and symbolic that ships from all over the world, entering the Golden Gate, would first see Indian land, and thus be reminded of the true history of this nation. This tiny island would be a symbol of the great lands once ruled by free and noble Indians. 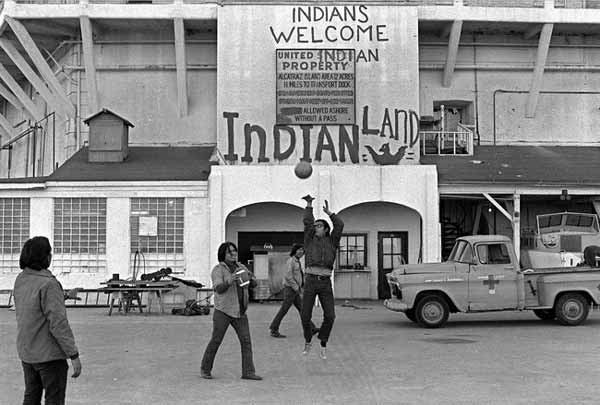 This is a call for a delegation from each Indian nation, tribe or band from throughout the United States, Canada, and Mexico to meet together on Alcatraz Island in San Francisco Bay, on December 23, 1969, for a meeting to be tentatively called the Confederation of American Indian Nations (CAIN).

On November 20, 1969, 78 Indian people, under the name "Indians of all Tribes," moved on to Alcatraz Island, a former Federal Prison. We began cleaning up the Island and are still in the process of organizing, setting up classes and trying to instill the old Indian ways into our young.

While it was a small group which moved onto the island, we want all Indian people to join with us. More Indian people from throughout the country are coming to the island every day. We are issuing this call in an attempt to unify all our Indian Brothers behind a common cause.

We realize that there are more problems in Indian communities besides having our culture taken away. We have water problems, land problems, "social" problems, job opportunity problems, and many others.

And as Vice President Agnew said at the annual convention of the National Congress of American Indians in October of this year, now is the time for Indian leadership.

We realize too that we are not getting anywhere fast by working alone as individual tribes. If we can gather together as brothers and come to a common agreement, we feel that we can be much more effective, doing things for ourselves, instead of having someone else doing it, telling us what is good for us.

So we must start somewhere. We feel that if we are going to succeed, we must hold on to the old ways. This is the first and most important reason we went to Alcatraz Island.

We feel that the only reason Indian people have been able to hold on and survive through decades of persecution and cultural deprivation is that the Indian way of life is and has been strong enough to hold the people together.

We hope to reinforce the traditional Indian way of life by building a Cultural Center on Alcatraz Island. We hope to build a college, a religious and spiritual center, a museum, a center of ecology, and a training school.

We hope to have the Cultural Center controlled by Indians, with the delegates from each Indian nation and urban center present for the first meeting on December 23, and at future meetings of the governing body.

We are inviting all our brothers to join with us on December 23, if not in person, then in spirit.

We are still raising funds for Alcatraz. The "Alcatraz Relief Fund" is established with the Bank of California, Mission Branch, 3060 16th Street, San Francisco, California 94103, and we are asking that donations of money go to the bank directly.

Many Indian Centers and tribal groups from throughout the country have supported the people on Alcatraz by conducting benefits, funded [sic] drives, and so forth. We are deeply appreciative of all the help we have received, and hope that all Indian people and people of good will, will join us in this effort.

We are also asking for formal resolutions of support from each organized Indian tribe and urban center. We can have great power at the bargaining table if we can get the support and help of all Indian people.

We have made no attempts at starting a hard and fast formal organization. We have elected spokesmen because someone has had to be a spokesman. We feel that all Indian people should be present or represented at the outset of a formal national Indian organization.

We have also elected a Central Council to help organize the day-to-day operation of the Island. This organization is not a governing body, but an operational one.

We hope to see you on December 23rd.

Indians of All Tribes