An Appeal for Human Rights 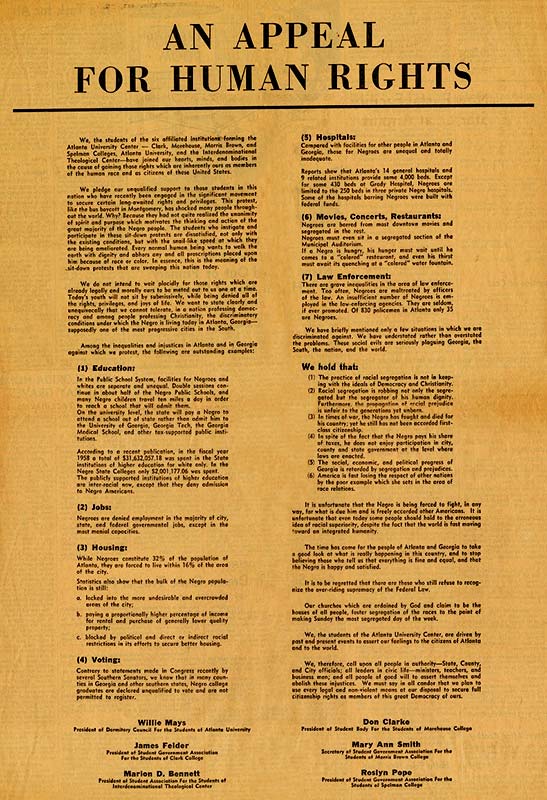 "The Greensboro sit-in was widely covered in the national media, and a veritable firestorm of sit-ins followed. Within days, a group of Atlanta University Center (AUC) students went to talk with Benjamin Mays, the most liberal of the AUC college presidents. Mays gave them his blessing, but soon after he got a phone call from Roy Wilkins, the conservative head of the NAACP, who'd somehow gotten wind of of the students' plans. He told Mays, who relayed he message to the students, that they should stick to their studies and the NAACP would continue the desegregation battle through the courts.
Student leaders from all six colleges of the AUC consortium decided to ignore Wilkings and to publish "An Appeal for Human Rights" in three Atlanta newspapers, including the Atlanta Constitution. Roslyn Pope, president of the Spelman student government and close to Howard and Roz Zinn (she was one of many students who used the Zinns' home as a combination sanctuary and planning center), wrote most of the first draft.
The reworded "Appeal for Human Rights" appeared on March 9, 1960 and was reprinted in the Nation on April 2."
— from Howard Zinn: A life on the Left by Martin Duberman

We, the students of the six affiliated institutions forming the Atlanta University Center — Clark, Morehouse, Morris Brown, and Spelman Colleges, Atlanta University, and the Interdenominational Theological Center — have joined our hearts, minds, and bodies in the cause of gaining those rights which are inherently ours as of the human race and as citizens these United States.

We pledge our unqualified support to those students in this nation who have recently been engaged in the significant movement to secure certain long-awaited rights and privileges. This protest, like the bus boycott in Montgomery, has shocked many people throughout the world. Why. Because they had not quite realized the unanimity of spirit and purpose which motivates the thinking and action of the great majority of the Negro people. The students who instigate and participate in these sit-down protests are dissatisfied, not only with the existing conditions, but with the snail-like speed at which they are being ameliorated. Every normal being wants to walk the earth with dignity and abhors any and all proscriptions placed upon him because of race or color. In essence, this is the meaning of the sit-down protests that are sweeping this nation today.

We do not intend to wait placidly for those which are already legally and morally ours to be meted out to us at a time. Today's youth will not sit by submissively, while being denied all of the rights, privileges, and joys of life. We want to state clearly and unequivocally that we cannot tolerate in a nation professing democracy and among people professing democracy, and among people professing Christianity, the discriminatory conditions under which the Negro is living today in Atlanta Georgia — supposedly one the most progressive cities in the South.

Among the inequalities and injustices in Atlanta and in Georgia against which we protest, the following are outstanding examples:

In the Public School System, facilities for Negroes and whites are separate and unequal, Double sessions continue in about half of the Negro Public Schools, and many Negro children travel ten miles a day in order to reach a school that will admit them.

On the University level, the state will pay a Negro to attend a school out of state rather than admit him to the University of Georgia, Georgia Tech, the Georgia Medical School, and other tax-supported public institutions.

The publicly supported institutions of higher education are inter-racial now, except that they deny admission to Negro Americans.

Negroes are denied employment in the majority of city, state, and federal governmental jobs, except in the most menial capacities.

While Negroes constitute 32% of the population of Atlanta, they are forced to live within 16% of the area the city.

Statistics also show that the bulk of the Negro population is still:

a. locked into the more undesirable and overcrowded areas of the city;

b. paying a proportionally higher percentage of income for rental and purchase of generally lower quality property;

c. blocked by political and direct or indirect restrictions in its efforts to secure better housing.

Contrary to statements made in Congress by several Southern Senators, we know that in many counties in Georgia and other southern states, Negro college graduates are declared unqualified to vote and are not to register,

Compared with facilities for other people in Atlanta and Georgia, those for Negroes are unequal and totally inadequate.

Reports show that Atlanta's 14 general hospitals and 9 related institutions provide some 4,000 beds. Except for some 430 beds at Grady Hospital, Negroes are limited to the 250 beds in three private Negro hospitals. Some of the hospitals barring Negroes were built with federal funds.

Negroes are barred from most movies and segregated in the rest.

Negroes must even sit in a segregated section of the Municipal Auditorium.

If a Negro is hungry, his hunger must wait until he comes to a "colored" restaurant, and even his thirst must await its quenching at a "colored" water fountain. 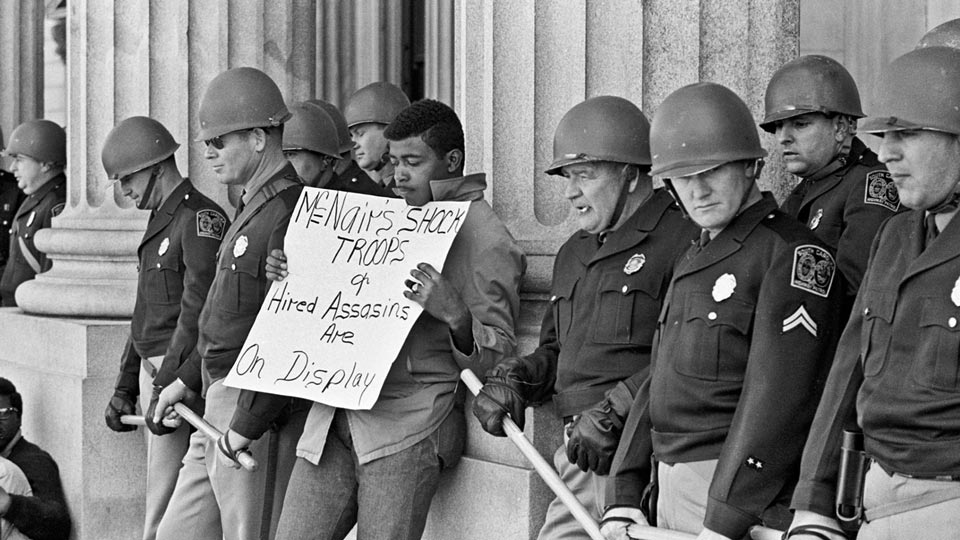 There are grave inequalities in the area of law enforcement. Too often, Negroes are maltreated by officers of the law. An insufficient number of Negroes is employed in the law-enforcing agencies. They are seldom, if ever promoted. Of 830 policemen in Atlanta only 35 are Negroes.

We have briefly mentioned only a few situations in which we are discriminated against. We have understated rather than overstated the problems. These social evils are seriously plaguing Georgia, the South, the nation, and the world.

1) The practice of racial is not in keeping with the ideals of Democracy and Christianity.

2) Racial segregation is robbing not only the segregated but the segregator of his human dignity. Furthermore, the propagation racial prejudice is unfair to the generations yet unborn.

3) In times of war, the Negro has fought and died for his country; yet he still has not been accorded first-class citizenship.

4) In spite of the fact that the Negro pays his share of taxes, he does not enjoy participation in city, county and state government at the level where laws are enacted.

5) The social, economic, and political progress of Georgia is retarded by segregation and prejudices.

6) America is fast losing the respect of other nations by the poor example which she sets the area of race relations.

It is unfortunate that Negro is being forced to fight, in any way, for what is due him and is freely accorded other Americans, It is unfortunate that even today some people should hold to the erroneous idea of racial despite the fact that the world is fast moving toward an integrated humanity.

The time has come for the people of Atlanta and Georgia to take a good look at what is really happening in this country, and to stop believing those who tell us that everything is fine and equal, and that the Negro is happy satisfied.

It is to be regretted that there are those who still refuse to recognize the over-riding supremacy of the Federal Law.

Our churches which are ordained by God and claim to be the houses of all people, foster segregation of the races to the point of making Sunday the most segregated day of the week.

We, the students of the Atlanta University Center, are driven by past and present events to assert our feelings to the citizens of Atlanta and to the world.

We, therefore, call upon all people in authority — State, County, and City officials; all leaders in civic life — ministers, teachers, and business men; and all people of good will to assort themselves and abolish these injustices. We must say in all candor that we plan to use every legal and non-violent means at our disposal to secure full citizenship rights as members of this great Democracy of ours.

WILLIE MAYS
President of Council For the Students of Atlanta University